Select a product below 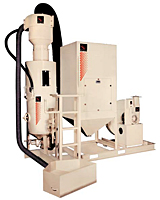 Using “economical” blast media, such as slag, for industrial blasting can be very costly indeed. Because these low-cost abrasives break down so quickly, reusing them is impractical. As a result, you’re constantly paying for replacement media, disposal of spent media, and manhours to move this material around – all of which can put a big drain on your profits.

With Empire’s pneumatic Blast & Recovery System (PRS), you can tap the cost-saving advantages of more durable media for only a modest investment. Empire’s PRS lets you move up to recyclable media, such as aluminum oxide, chilled iron and steel grit, which can be used effectively over and over – from 6 to 200 times. The result is usually a very attractive return on investment in media savings alone.

Reusable media are also faster acting and less dusty, meaning you get the additional advantages of increased productivity and a cleaner working environment. With the PRS, you can move blasting operations into enclosures to comply with increasingly stringent environmental regulations. And, because the PRS recycles good media while removing dust and fines, blasting results are more consistent.

Simple blast controls and convenient media-loading procedures make Empire’s PRS very easy to operate. A built-in access ladder and viewing window in the system’s storage hopper are just two examples of the PRS’s many friendly features. And, with heavy-duty duct, an Ultrawear-lined reclaimer, and a silicone carbide nozzle, you know the system is designed to last.

Skid chassis is standard.
All models available with optional dolly chassis for mobility.